A Look Into The Deaf World 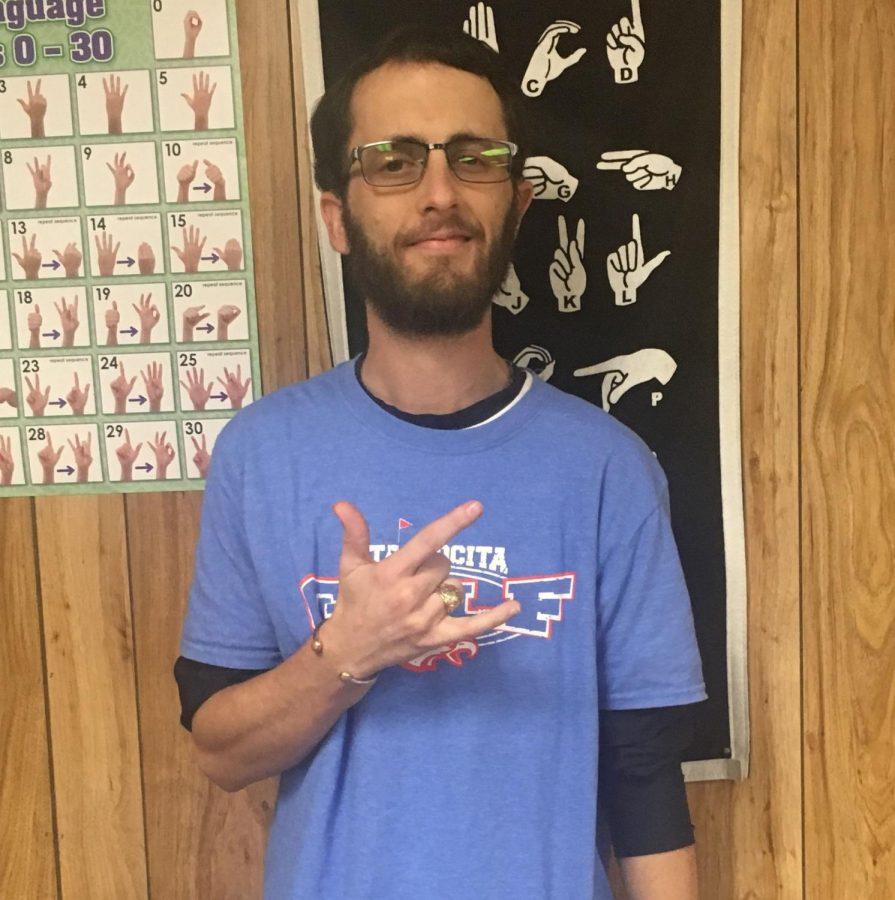 Every year for the last full week of September, we celebrate Deaf awareness. This year for Deaf Awareness Week, our newspaper staff put together a list of questions they would like to ask a deaf person. Our beloved American Sign Language teacher, Mark Pyeatt was kind enough to answer for us.

Do you interact more with the hearing or the deaf world?

Pyeatt went deaf at the age of 23, meaning he has “had experience with both the Deaf and hearing world.” Though he teaches ASL, Pyeatt said he considers himself “little d deaf,” meaning he isn’t extremely involved in the Deaf community.

How long did it take to learn sign language?

“I started learning ASL before I became deaf. I had a lot of practice during college, but I would say I didn’t become fluent until I was out of college.”

What’s something annoying that people ask you about being deaf?

“It’s not really something that people say, but I hate when hearing people try to over enunciate or talk slowly to me. I’m like, ‘I just can’t hear, I’m not stupid.’ It’s a common misconception about deaf people.”

Why did you want to become an ASL teacher?

“I’ve always known I wanted to be a teacher. I chose to be an ASL teacher because I want to educate the deaf and hearing world about each other. I’m also just trying to make people laugh and bring happiness to people.”

“Definitely. Sign language has saved my life. After I went deaf, when adjusting and learning to communicate, sign language really brought me back.”

Do people ever stare when they see you sign?

“Yeah. That’s one of my favorite things. People think there are aliens in a restaurant because someone is speaking with their hands. But then they eventually realize, ‘Nope, no aliens. It’s just a language.’”

Do people ever try to sign to you when they notice you use ASL?

“It’s not often but occasionally you’ll see a person sign to you. It’s cool just to see people trying and making an effort. Deaf people will usually help you out [with signing] too, so don’t be scared of a deaf person, just talk to them.”

What is your favorite thing about being deaf?

“I always see hearing people in public yelling, trying to talk over the noise around them. It’s loud in those environments, but not for me. It doesn’t matter how loud or quiet it is, we can still prevail with our hands,” Pyeatt explained. “The only thing I miss about hearing is music. Other than that, I like being deaf better.”

What has becoming deaf taught you?

“For me, becoming deaf — life’s a process. It taught me a lot. First off- there are a lot of things you can’t control. Things can happen overnight,” Pyeatt stated. “It also helped me grow as a person. It helped me learn to stress less and not worry about the things you have no control over.”