Two orchestra students have qualified for State for a second time. Kristen Karamihan on harp made second chair and Anthony Chavezplata on double bass made tenth chair. 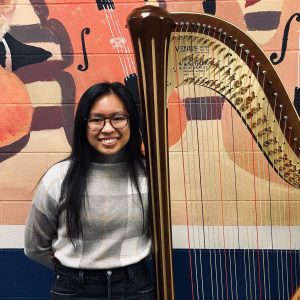 Senior Kristen Karamihan: My parents had coworkers whose kids were in the AHS Orchestra program and every year we would go to the “Performance for a Cause” concert. The proceeds of ticket sales [of the cause show] go to the charity organization that the senior orchestra class of that year chooses. So years and years of enjoying and watching those concerts, made  me choose orchestra in 6th grade. It’s crazy to see things go full circle as I was actually a solo performance for the performance for a cause show in 2019.

Junior Anthony Chavezplata: In 5th grade, I decided the next year would be a great year to learn the double bass after having the middle school directors come to my elementary school to display all the instruments in the string family. I just knew from one look at the double bass that it’s the instrument for me.

Let’s see what Daramihan and Chavezplata have to say about going to state again in the year of 2021.

Karamihan: I feel extremely honored and grateful to have made it a second time. This is my last year playing the harp and even touching a harp probably since I don’t own a harp. I will not get to enjoy that moment of knowing I can play at any time. I am not pursuing music in college so I wanted to make the most of my last year compared to my sophomore year in which I ranked 7th in the state. I would have been placed in the symphony’s highest orchestra this year and was looking forward to creating music with the best musicians in the State.

Chavezplata: Going to All-State for the second time around is an indescribably great achievement for me. Since the second semester of freshman year, I’ve set goals for myself to achieve. Having made All-State last year, I felt a surge of confidence in my playing ability which then promoted me to set my goals even higher. As a result, I was able to make All-State symphony. Being amongst other extremely capable musicians puts pressure on me to do well and represent my school in the way it deserves. Therefore, I’m going to keep working harder in order to compete with the other musicians.

According to Karamihan, it is uncertain how Covid-19 will affect the TMEA (Texas Music Educators Association ) schedule. The host of the TMEA convention, where the state ensembles perform, cancelled the in-person event this year and made it virtual. There will be no state ensembles performing in the month of February. They are trying to arrange something for the state musicians for sometime in June according to their website, however there is no official date or final word.