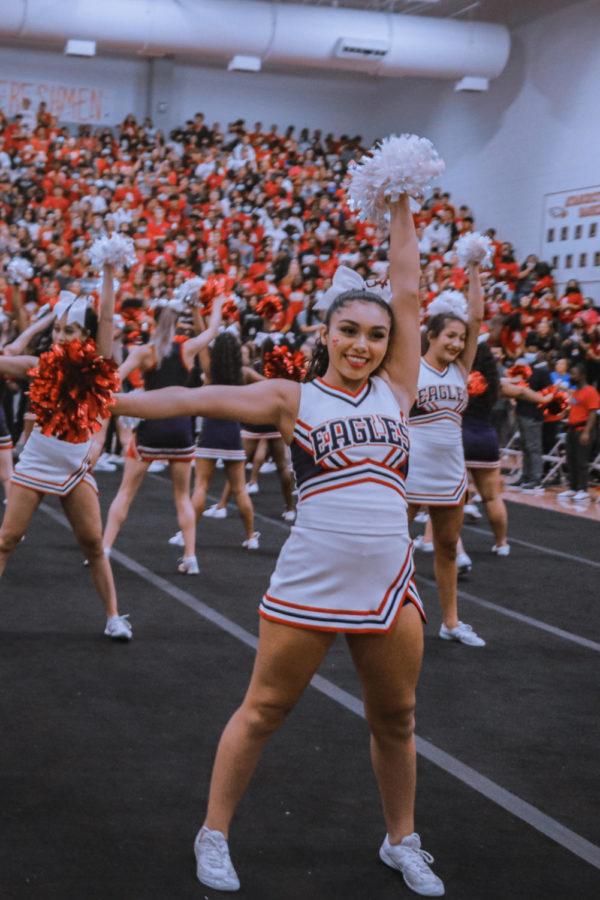 The cheerleaders performed in support of the football players. Both JV and varsity cheer performed.

The first pep rally of the year took place on Thursday, Aug. 26. The band performed, the cheerleaders did stunts, and the Patriettes danced in support of the varsity football team.

“It was very exciting to finally have the freshman and sophomores experience their first pep rally,” senior saxophone player Jade Ochoa said. “It was worth the wait for the returning and new band members finally experiencing their first football season event. I think it got them very excited and motivated them for the football game today.”

The football team walked into the gym as the band played the school fight song. Pep rally hype started with the “Rich and Pretty” chant. Then, the JV/freshman squads and varsity cheerleaders performed their cheer routines.

“It’s very stressful because I’m a captain,” junior JV cheerleader Hayley Gregory said. “We want to put on a show for the school but it’s also important not to let your team down.”

Coach Stump was welcomed onto the scene with his song. He spoke a few words about his team and their preparation.

“I tell them all anyone expects or wants is the best they can do,” Stump said. “The results will usually be what you want. When it’s not, we need to find out why that is and fix it.”

“Dependability, accountability, and responsibility are the qualities of a good captain,” Stump said. “Someone who has these three attributes and is humble and understands that their goal is for the good of the group, not just individual awards.”

After the football team’s introduction, the student council hosted the pep rally game. The classes, as well as a few teachers, competed in musical chairs.

“The game was so fun to watch,” junior Magdelena Romero said. “I was the one pushing pause and play [for the music.] I’d like to see everyone sing along to the song, but pausing the music was [also] fun. [It] was fun to see all the staff and students fight for a chair.”

During the game, four chairs broke because the players were scrambling when the music stopped. The last two in the game were forensic science teacher Dr. Kia Russell and senior Decisus Robinson. Decisus won the game and the seniors got hyped and cheered. After musical chairs, the Patriettes did a dance routine, led by their captains.

The class hype competition was judged by Mr. Falker. It was won by the seniors, whose screams were deafening.