Dear R. Kelly, No Means No

Like it often does, winter of 2018 came fast and ended even faster. While the year ended with Christmas just behind it, it also held many hidden truths waiting to be told. As many heard during their time off from work or school, LifeTime Network came out with a brand new series for us to talk about when we returned to our normal schedules. A show with the title, “Surviving R. Kelly,” was sure to catch some attention, but the outrage it caused seemed to come as a bit of shock to some.

For over 2 decades, musician and producer, Robert Kelly has been accused of mentally and sexually abusing numerous women, most of whom were under the age of 18 at the time he was accused. In the early 90s, Kelly worked with an up-and-coming singer by the name of Aaliyah, whom he mentored as she recorded her debut album. At the age of 27, Kelly illegally married Aaliyah, who was only 15 years old. Soon, their marriage was annulled when it surfaced that the two of them lied about Aaliyah’s age, claiming that she was 18.

Other than R. Kelly’s marriage being annulled, what exactly was his punishment for marrying a minor? There wasn’t any. Despite the countless allegations towards Kelly, spanning 3 decades, he was let off the hook by juries most likely made up entirely of his own fans. Along with marrying a child when he was 27, a graphic video of R. Kelly with a 14 year old girl was somehow released to the public. Although anyone with vision could discern he was the man in the video, he received no consequences for having sexual relations with a minor. In the end, after being accused multiple times with absolutely no punishment, it appeared as though Kelly was officially untouchable.

Unfortunately, R. Kelly is not the only celebrity known for using his advances in the entertainment industry to silence victims. In recent years, the #MeToo movement has served as a safe outlet for sexual assault and harassment victims to come forward. This movement originated as a way for victims to tell their stories without having to share their identities. When the movement began catching the eye of the public, most people were supportive of those participating. However, it brought about a storm of people trying to blame these men and women for what had happened to them. Some hail this group as reasonable, but those who have respect for themselves and others would refer to these individuals as victim-shamers. This is, perhaps, the largest travesty of all. 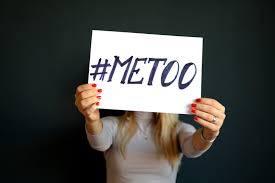 If the term, victim-shaming, doesn’t sound harsh, it definitely should. For generations, women have been tricked into believing that they’re responsible for someone else’s indiscretions. Victim-shaming is when someone tries to blame someone for the harm that someone else bestowed upon them. People often do this by asking cryptic questions and disguising them as their own curiosity.

Still need some examples of victim-shaming? Here are a few:
• “What were you wearing?”
• “How did you present yourself?”
• “Did you do anything to make him think you wanted it?”
•”Were you under the influence?”

It may sound hard to believe, but there is a solution to every issue. In fact, the solution to this one involves all of us. Stop overlooking crime just because it was committed by your favorite musician or athlete. Leave victim-shaming in 2018. Speak up. Most of all, remember that no means NO.