The Dangers Of Vaping 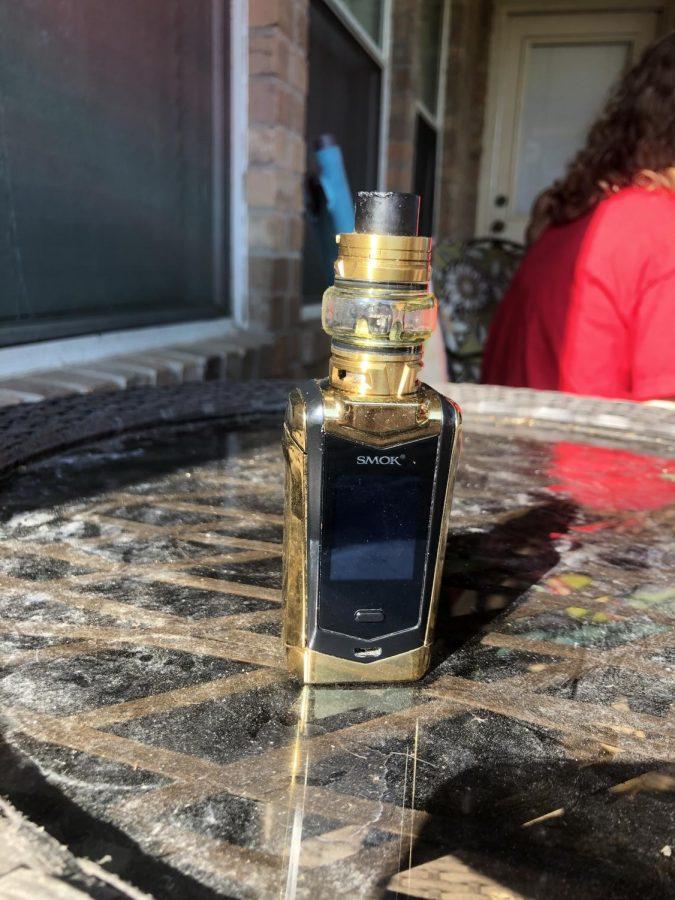 A Smok vaping device with out Juul pod, this device is mainly used by teens.

Vaping: Sorry kids it’s not good for ya

Vaping in teens is spreading like a modern plague.

“Kids are most likely to start vaping because all of the flavors are marketed towards teens,” Gold 2 assistant principal Lori Kittrell said.

Currently 3.6 million middle and high school students are vaping most likely because they think it is less harmful, costs less than traditional cigarettes, and has many flavors like mango and “unicorn puke,” according to Yale Medicine, Yale School of Medicine.

“Vaping can kill people faster and most likely leave the younger generation with many lung problems,” freshman Emely Ramirez said.

Vaping can cause some serious illnesses like high blood pressure, high adrenaline, increased heart rate, the likelihood of a heart attack and even death.

“They are stronger than normal cigarettes and teens can develop a nicotine habit,” White 1 secretary Loraine Schump said. “Vaping has not been proven to help adults quit [smoking]. I think the school could benefit from informing students about vaping and what it can do to students.”

Teens now may think that it is less harmful than cigarettes but it can be as addicting as heroine and cocaine. Vape devices can have a higher dosage of nicotine and the voltage can be increased for a better hit. Vaping can increase the risk for teens to smoke actual cigarettes when they are older. For teens, Juul is the most sold vaping device because it’s an easy device to buy and keep discrete.

“Kids nowadays think they are bullet proof,”Gold 1 counselor DanWheeler and secretary Sheryl Stafford said. “The school needs to get parents more involved. They also need to watch what their kids get on the internet.”

According to BuzzFeed, Chance Ammirata started vaping because of his friends and because vaping made all of his anxiety and worries go away. He quit vaping due to being hospitalized. Ammirata is now sharing the news and telling friends that they should quit in order to be in good health.

“Teens nowadays think vaping is cool, but they don’t know the major lung issues it can cause,” world history teacher Charles Godfrey said. “I think teens are being peer pressured into vaping by friends and others.”

“If someone vapes in class they blow out a huge cloud. It can distract the professor and student,” A&M student Dylan Glass said. “I told my friends to stop vaping because multiple Aggies have died due to vaping.”

“At H-E-B, the safety of our communities and the well being of all Texans is our top priority,” a representative from the H-E-B company said. “Due to unknown health implications of vaping, H-E-B immediately discontinued the sale of e-cigarettes.”

Vaping can be caused by peer pressure. It can cause many health issues in teens in this day in age.